After singing "Unchained Melody" on the television series, "Soldier, Soldier", Robson and Jerome were contacted by Simon Cowell and persuaded to sign a record contract. "Unchained Melody"/"White Cliffs of Dover" was released in May of 1995, and immediately shot to the top of the charts, where it stayed #1 for 7 weeks. By the end of the year, it had sold nearly two million copies, becoming the biggest-selling British single of the '90s. It was followed in the fall by "I Believe"/"Up on the Roof," which was nearly as successful, spending 4 weeks at #1. Spurred by the success of the singles, a debut album was put together and it too went to number one. Produced by Mike Stock, Matt Aitken, and Nigel Wright, the record was a slick, commercial effort comprised entirely of covers, including versions of "Danny Boy," "Daydream Believer," "The Sun Ain't Gonna Shine Anymore," and "Amazing Grace."
Robson & Jerome delivered a second album, Take Two, in the fall of 1996. Like its predecessor, it entered the charts at number one, and were usurped only by the U.K. pop phenomenon of 1996, the Spice Girls. The duo rounded out their partnership with two compilations, "Happy Days: The Best of Robson and Jerome" (1997) which went to #20, and finally, "The Love Songs" (1999) which did not chart.

As for Robson, he released his solo album, "Moment in Time", in 2002. It is a 15-track CD album featuring his versions of classic tracks including "Me & Mrs Jones", "Smoke Gets In Your Eyes" & "Everlasting Love".

A musical celebration of our history and culture, which spans musical boundaries from folk and rock to classical and traditional music hall styles. This important 20 CD set features almost 300 tracks by a vast array of performers accompanied by hundreds of musicians bringing you the most comprehensive collection of North East songs ever recorded.(Mawson-Wareham.com)

Robson sings "Keep Your Feet Still", and you can listen to it through the Northumbria Anthology link listed below. 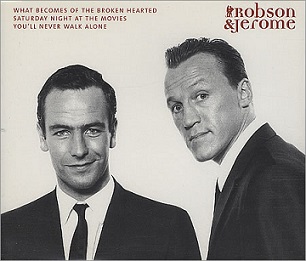